The visitor finds the Jim Thompson’s old residence and tropical garden down a narrow Bangkok lane, just a block away from the bustling shopping districts.

Jim Thompson built his house in 1958-59 on a plot of land across the canal, or klong in Thaï, from the Bahn Krua silk weaving community. For his new home, Thompson acquired several Thai houses some of which were dismantled and sent down the Chao Phraya River to Bangkok where they were reassembled. The combination of Thai design and Thompson’s own architectural skills created a unique structure that became his home, a venue where he entertained visitors from Bangkok and around the world and a setting for his unrivaled collection of Asian antiques.

The residence is built on teak pillars, a full floor above the ground and is enveloped by a beautifully landscaped tropical garden.

Since Thompson disappearance in 1967, little has changed in the home that was the “talk of the town”. 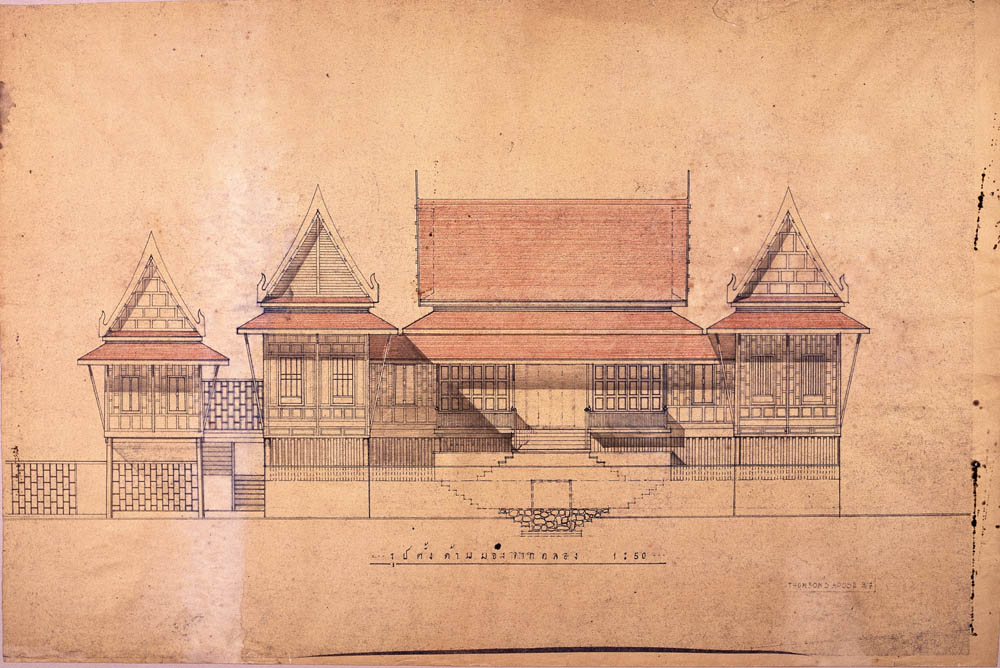 Jim Thompson found this “wonderful” plot of land of one rai, or approximately half an acre, in July 1957. One of the weavers has a lovely old teak house built by his great grand father and wants a new house. Thompson foresees to get the old house and move it across the canal: “I have fun making plans in my spare moments. The land has tremendous trees and all sort of mango trees thrown in. Could have a wonderful garden running down to the canal… All on the second story. It would be lovely to have a place for all the paintings and bronzes”, Jim wrote to his sister Elinor. 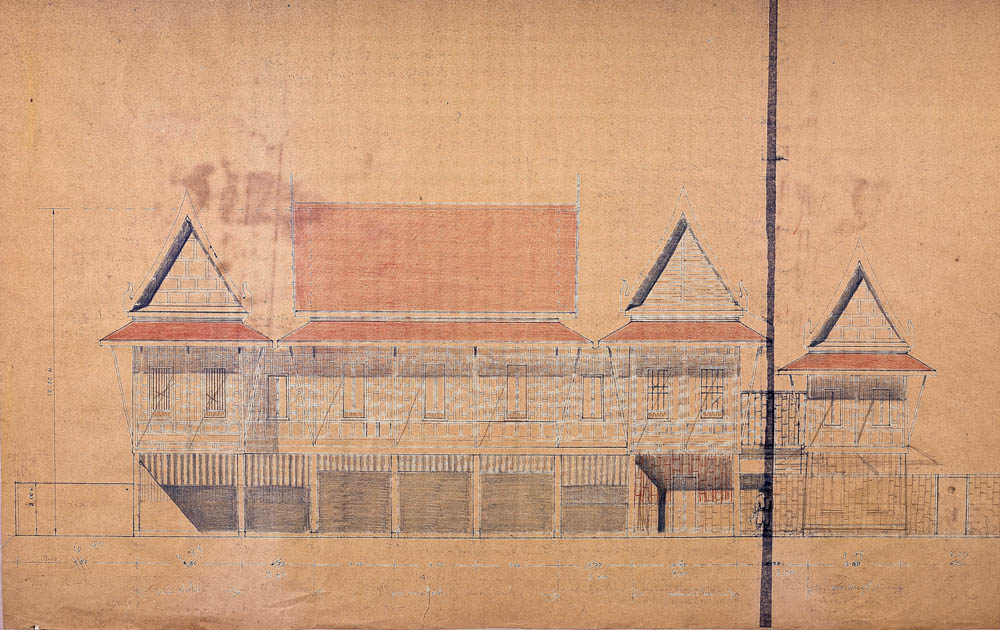 During the first quarter 1958, Thompson will acquire six old teak Houses, from different sources, three coming from Pak Hai in the Ayutthaya region, two found in Bangkok, but the oldest and the most impressive dates from around 1800 and was a weaver’s house from the Cham village of Bahn Krua. 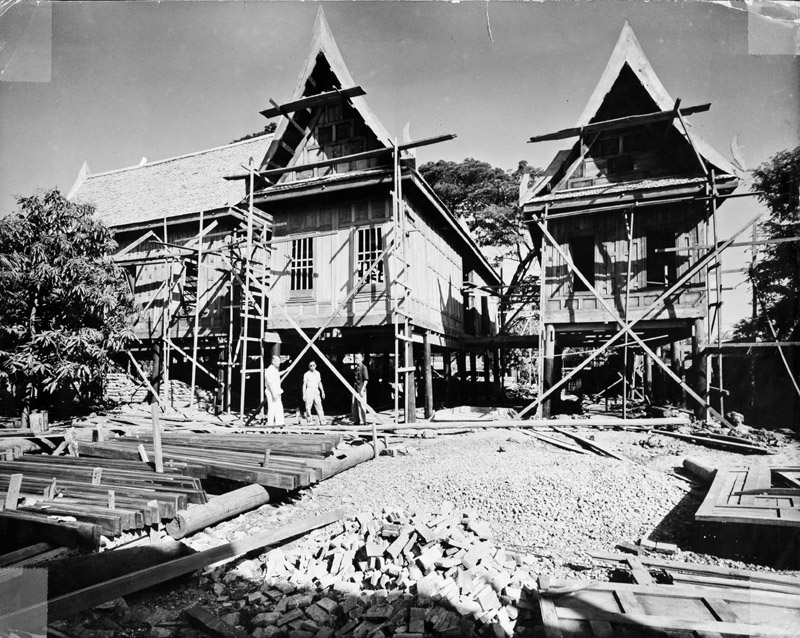 Thompson on the building site. He brought a group of skilled carpenters down from Ayutthaya to reassemble the woodwork on his property. One practical feature of the Thai house is the ease with which it can be assembled or taken down. The entire house is built in light, pre-fabricated sections with each section forming a wall. Each wall is then fitted together and hung on a frame of wooden pillars without nails. In former times, the fact that the house could be taken down, stacked on a raft and floated down the nearest canal to a new location was well-suited to the indigenous way of life 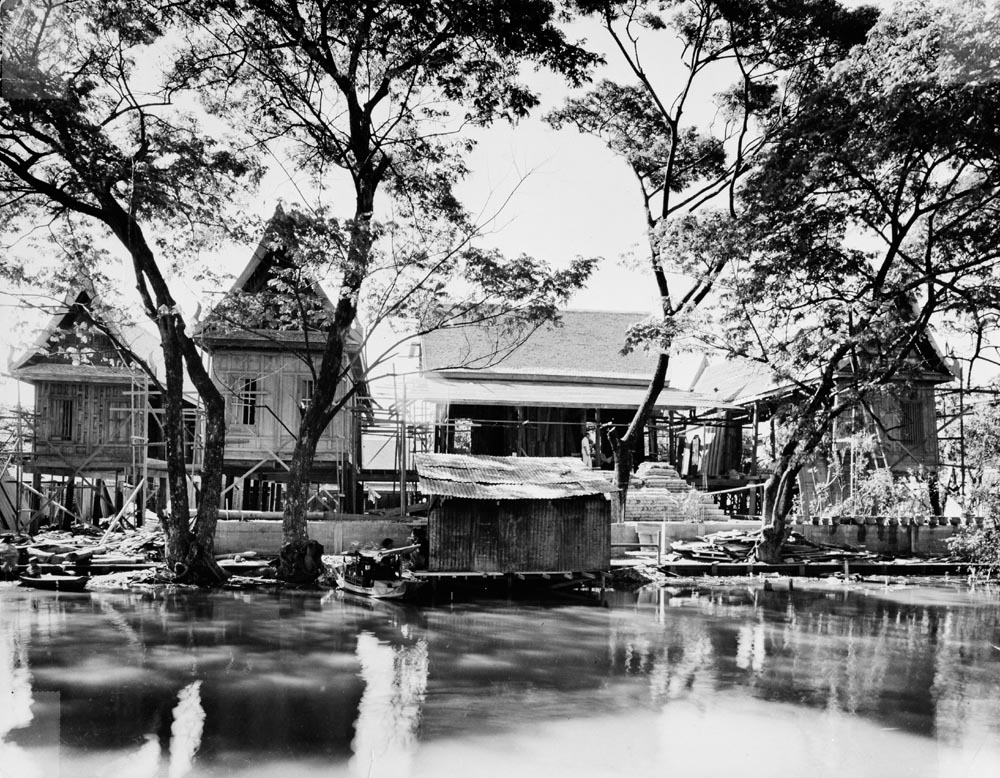 The house during construction. The property is facing the canal, or klong, across from the 250-year old Bahn Krua village, home to Jim Thompson’s Cham silk weavers. 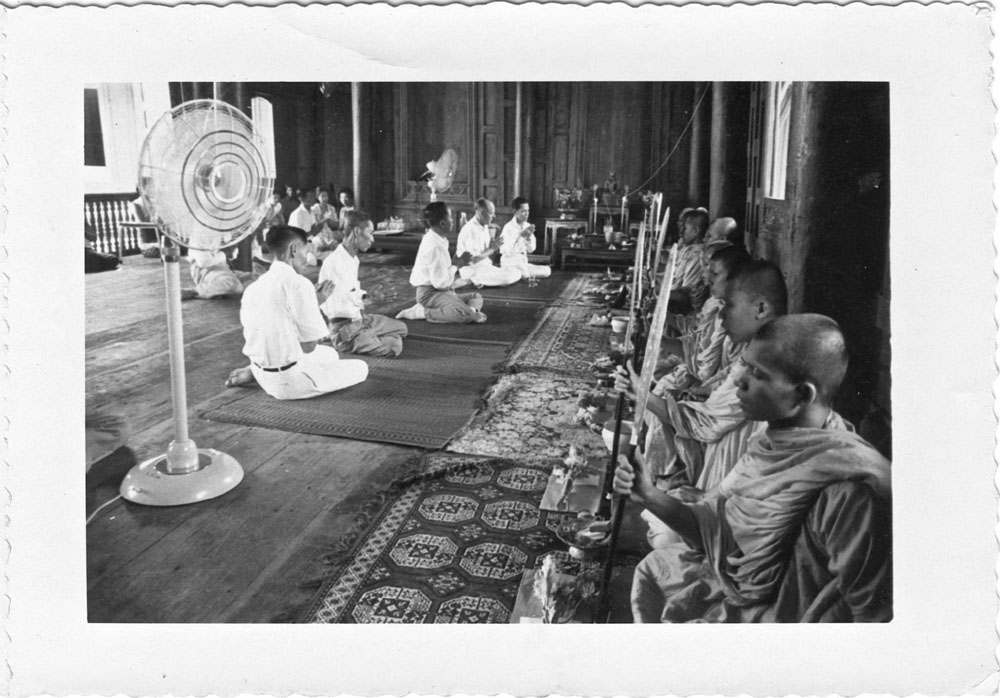 During the construction, Jim Thompson followed the religious rites and ceremonies before to move in on April 3, 1959. Buddhist monk and Brahmin priest advice is traditionally sought with regard to the auspicious dates and times based on the date of the birth of the owner of the house relative to several other astrological elements. 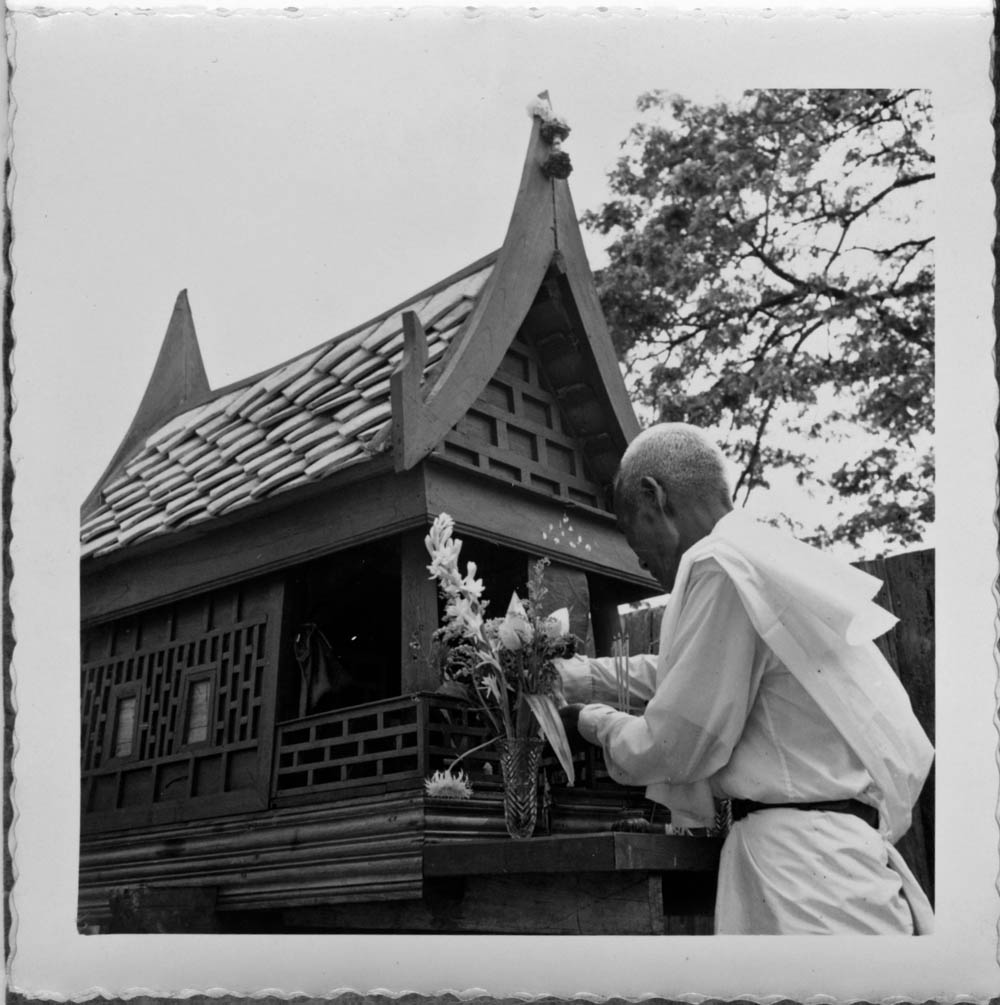 According to traditional Thai belief, the spirit house provides a home for the resident spirits of the compound. If the spirits are offended, bad luck and misfortune befall the owner and residents of the house. To appease and pacify the spirits, a daily offering of incense sticks, fresh flowers and food is presented. The location of the spirit house is of primary importance. It is never placed in a location where the shadow of the main building casts a shadow over it.

Like temples, traditional Thai houses have steep roofs arching upwards towards the sky. Both the walls are inclined towards the center creating the illusion of height. Elevated houses facilitate the circulation of air and offered a more comfortable living space. It was cooler to live in and protected the home from the risk of floods in the monsoon season. It also offered protection from hostile wildlife. Additionally a great number of windows and doors are carefully aligned to facilitate an uninterrupted flow and aid the circulation of air. Thompson wanted his house painted “barn red”, though walls were generally left unpainted, or sometimes oiled.

The open space beneath the house was used as a living area in the hot season, as storage for the season’s harvest, and as a place to do weaving. Jim used it as an open terrace for displaying his collection and for large parties. 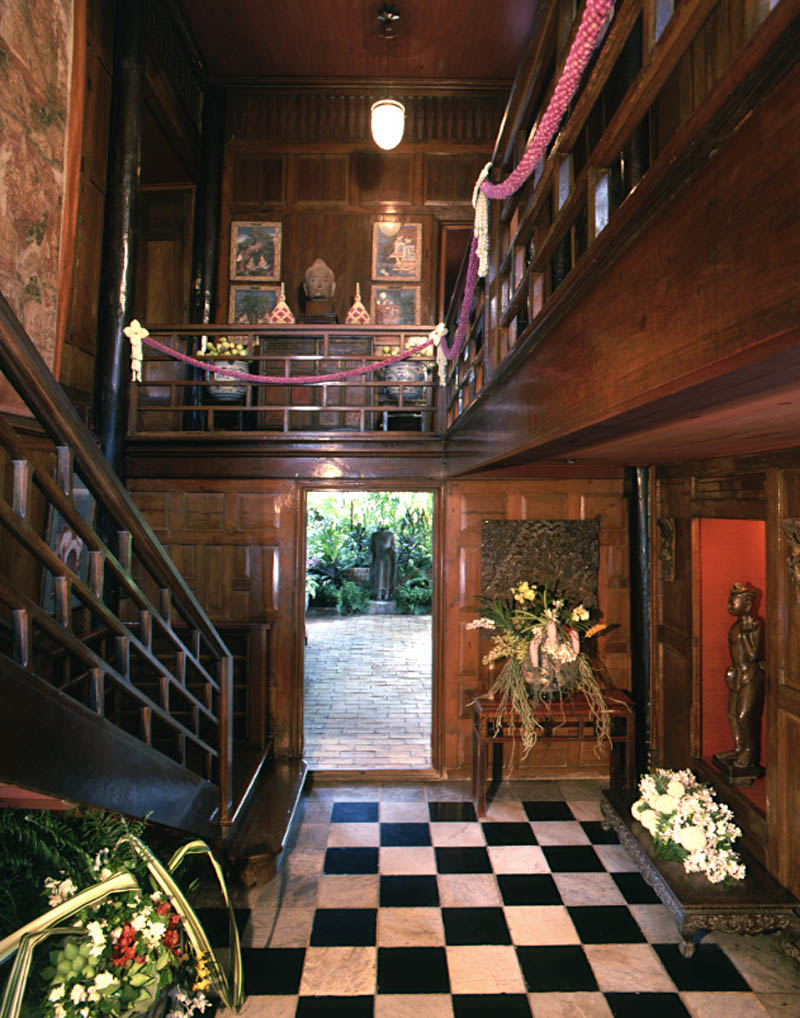 Thompson added his personal touches to the design like an entrance hall with an indoor central staircase. 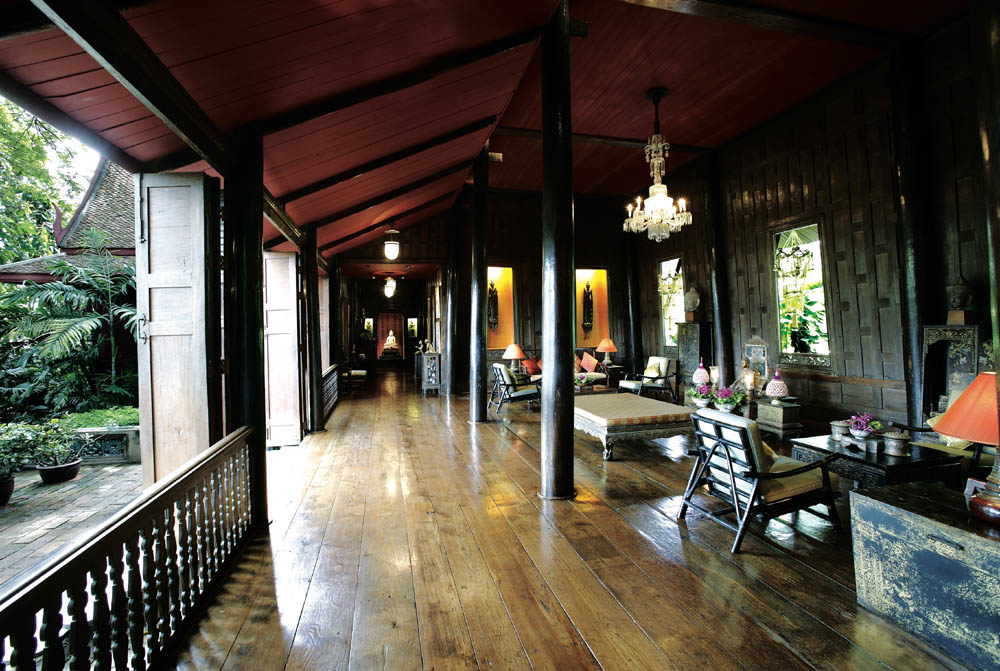 Most remarkable is the house design resembling a Western mansion with two wings. All the rooms are built on the same level and linked by a large corridor, like in an apartment. He also reversed wall panels and windows sculptures so to be seen from inside the house. 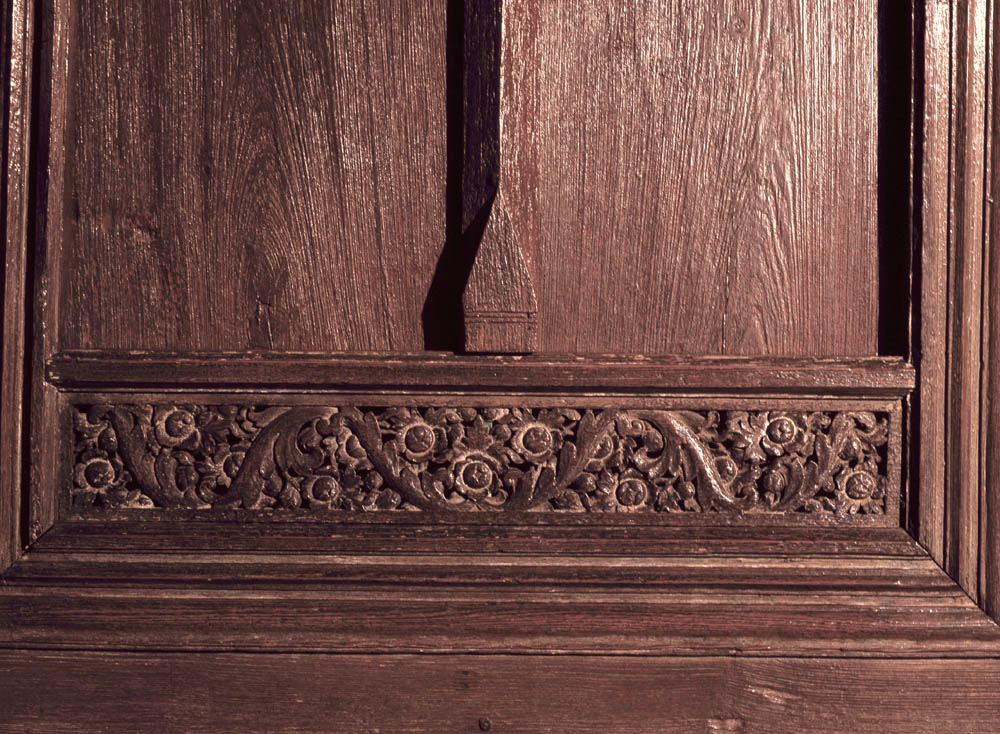 Carved panel beneath a window. Only the houses of affluent Thais bore such decorative elements. 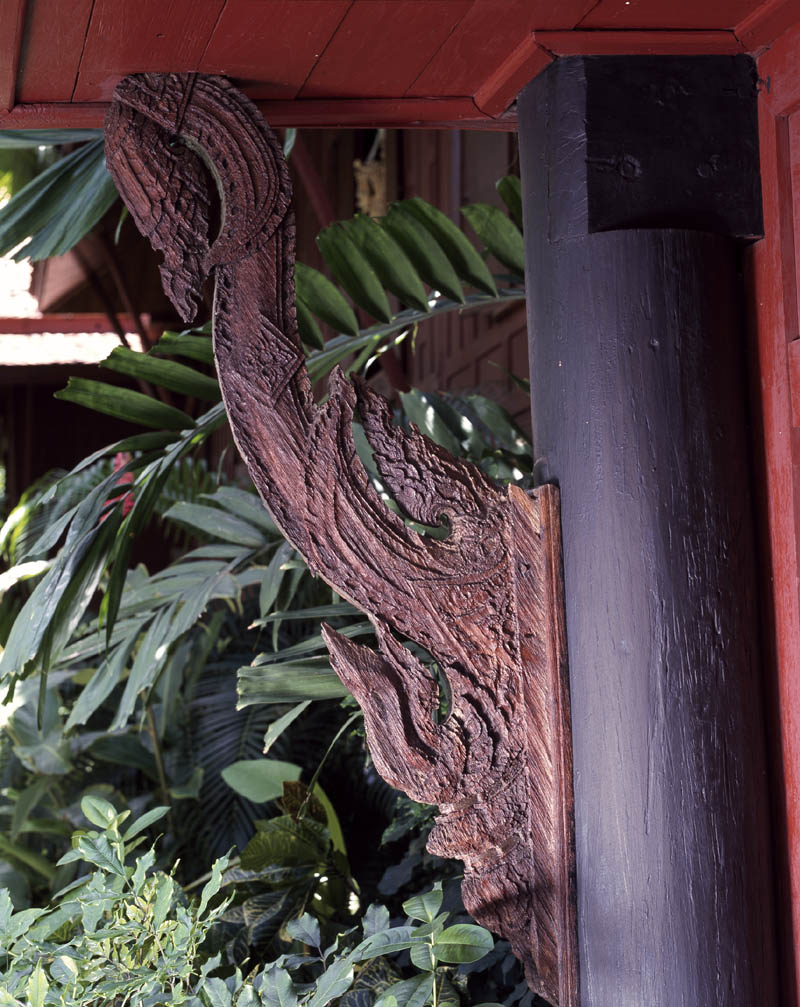 A carved wooden bracket of a similar kind to those used to support eaves on Thai temples
and palaces. 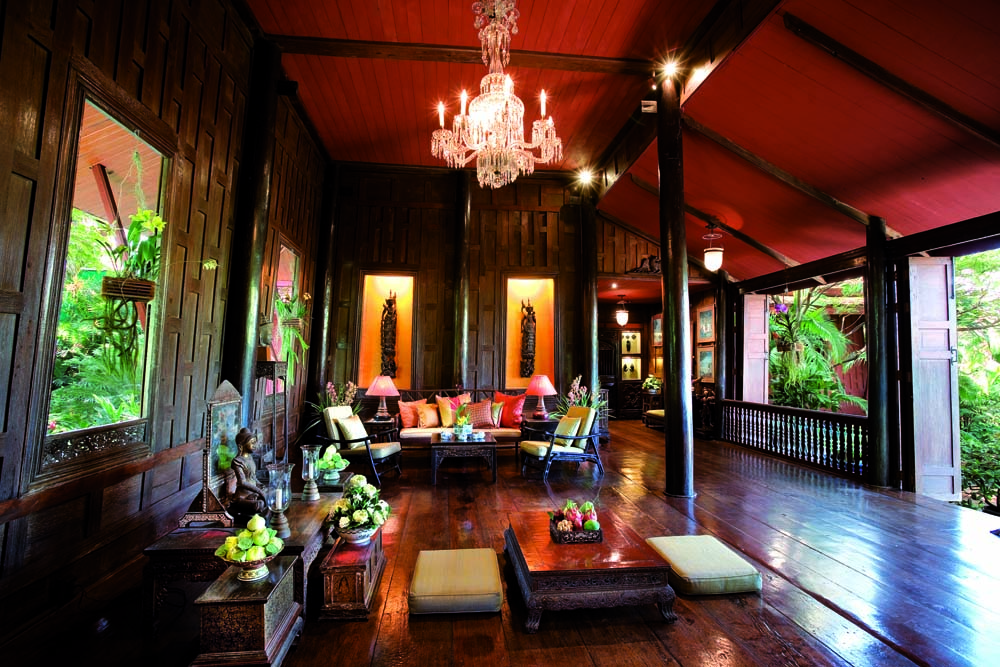 The oldest part of the main house, dating around 1800, came from the weaving village. It is also the largest single structure that became the drawing room. A glittering crystal chandelier from a former palace hangs from the high ceiling. Burmese statues from Amarapura decorate the niches, which were originally windows. 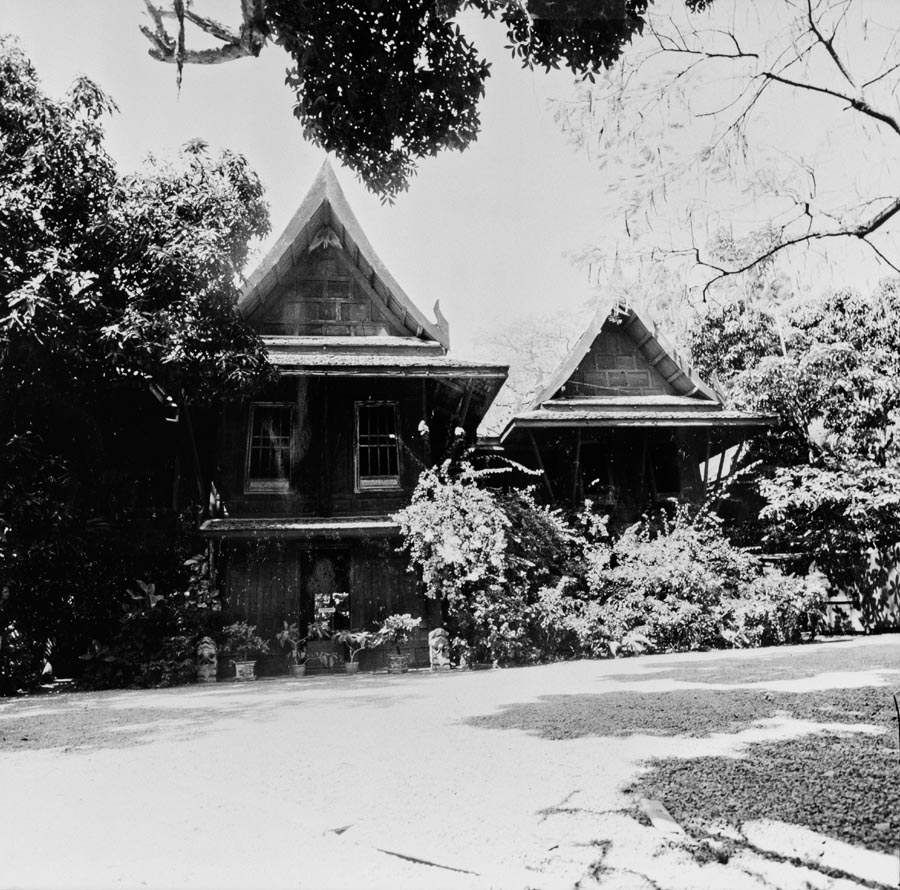 View from the courtyard  in 1959 showing the entrance to the stairwell and on the right, the wing that formerly served as the pantry. The next oldest part is the pantry wing which also came from the weaving village. Dated from the middle of the 19th century, it had been part of an old palace which had been sold and moved to Ban Krua fifty years before. 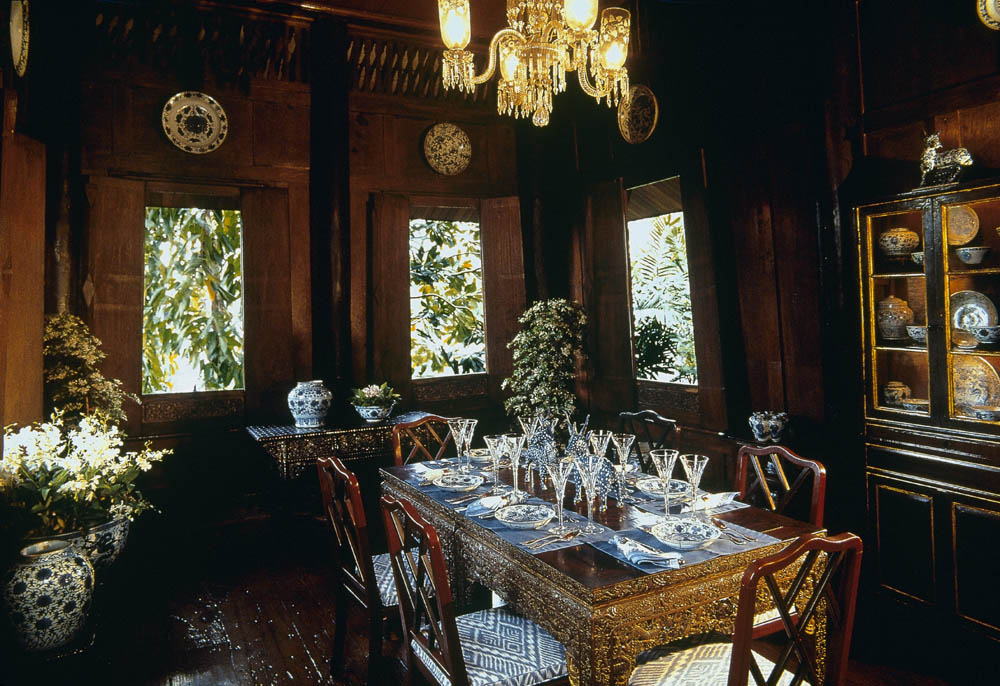 The dining room wing is a separate house unit and has windows on three sides. 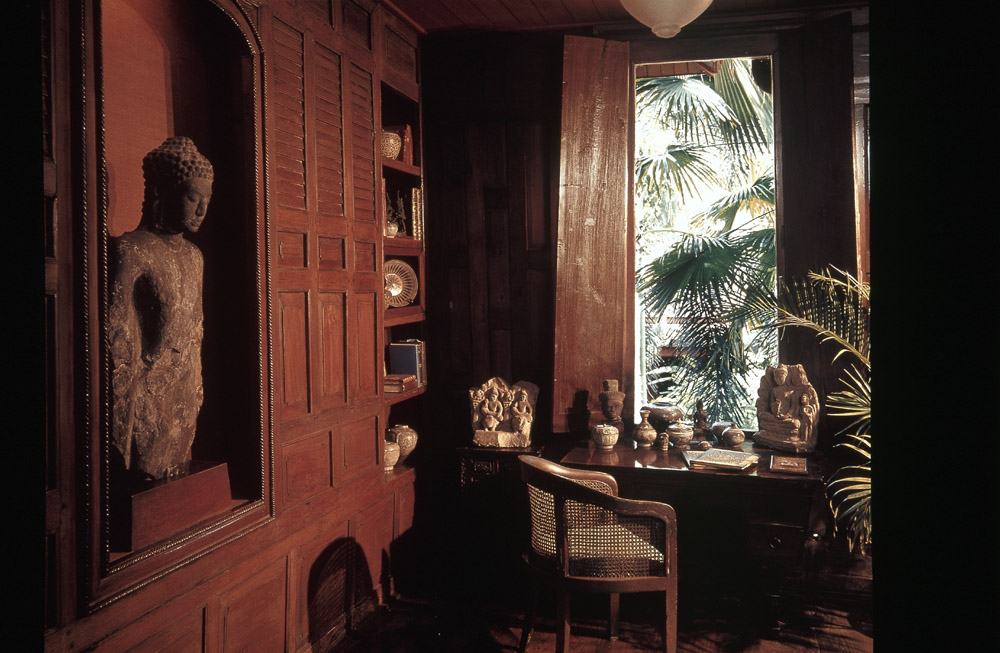 This small room is the only one in the original house with glass window and air-conditioning. 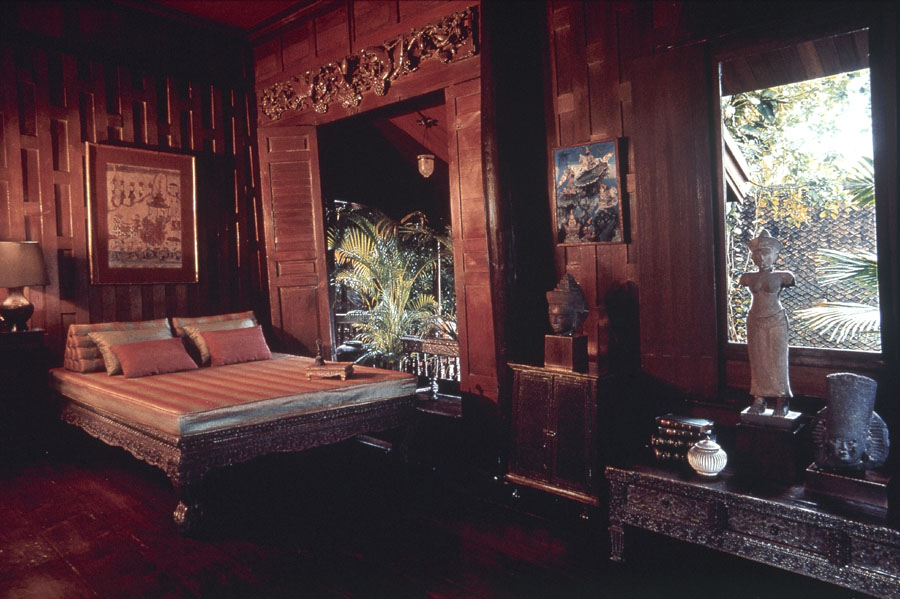 The master bedroom wing was part of the same old house that supplied the dining room, a structure that Thompson found in Pak Hai, a village near Ayutthaya. 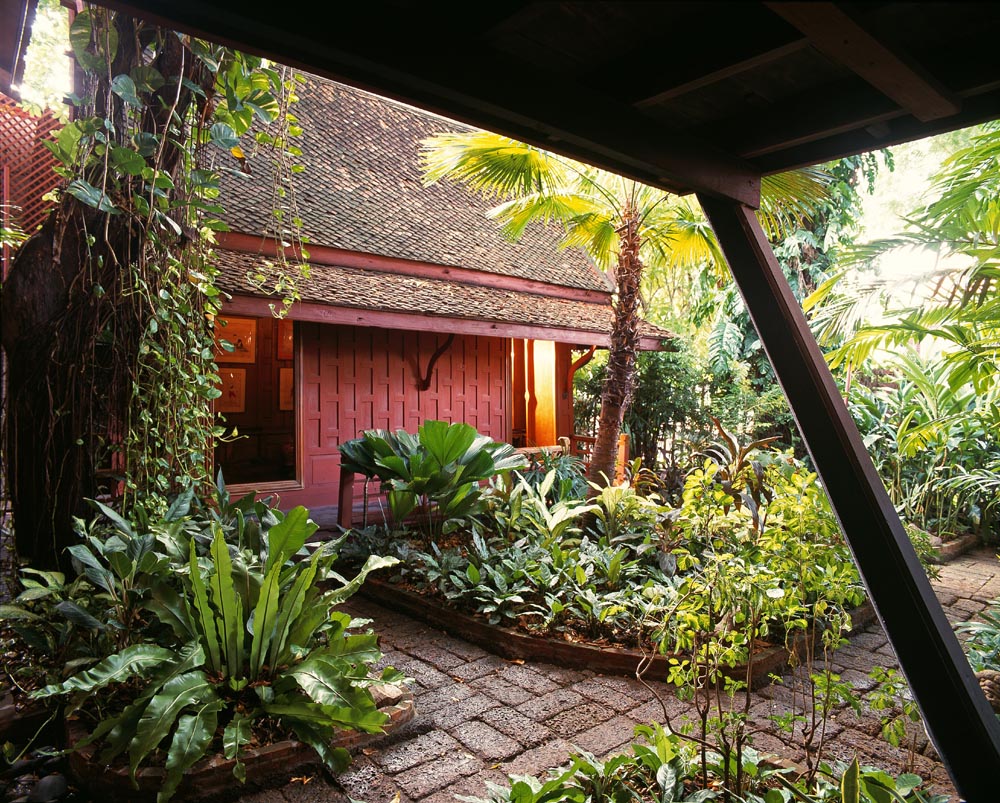 In 1963, Thompson will add two small Thai houses on his property that “were lying outside his fence”: one as an addition to the gardener’s house and the other one to be an art gallery next to the canal. Eventually, Jim went to Pak Hai in 1965 to find a house to built a guest private house. This building shares the terrace next to the master bedroom in the main residence and is the last addition that Thompson did on his property. 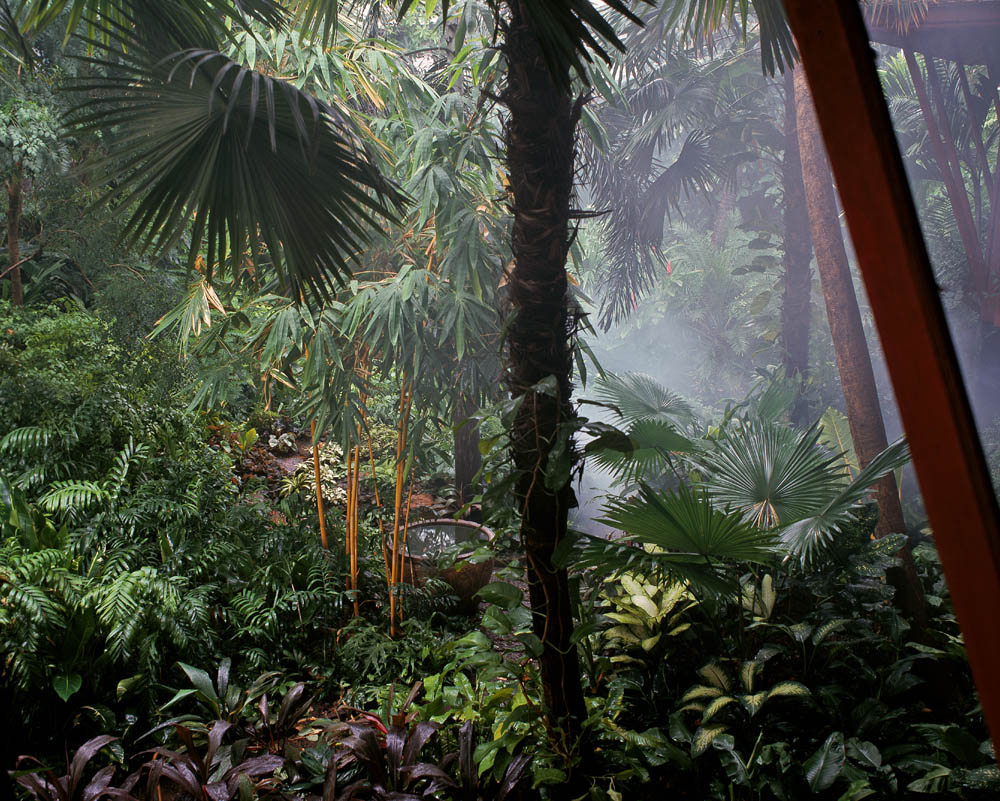 “Jungle” is how Jim Thompson described his densely-planted garden, with lofty palms, golden bamboos and creepers. In general outline, the planting is the same as it was in Jim Thompson’s time. 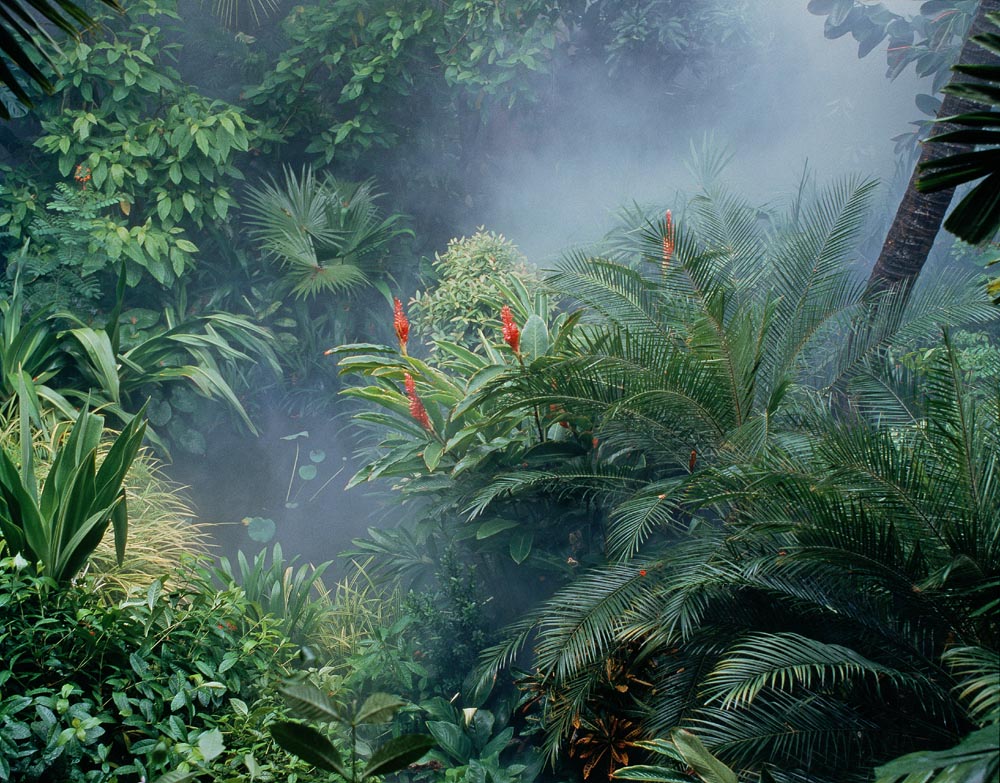 The garden is constantly changing but the ambience has shifted from uncontrolled chaos to controlled chaos thanks to professional care. Here, the red ginger (Alpinia) grows nearby the small pond in the rear garden.